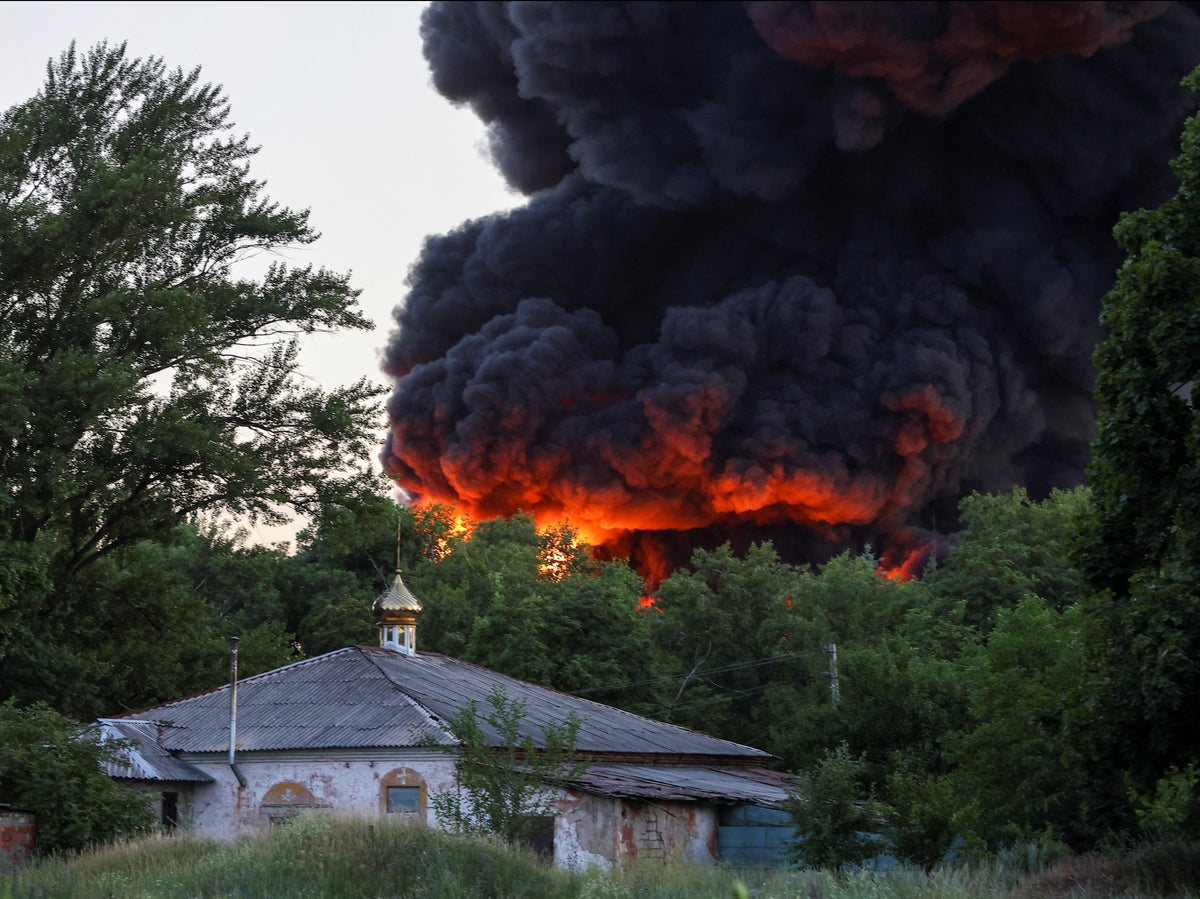 Russia has been accused of raising “true hell” in Ukraine’s eastern industrial heartlands this weekend, as an onslaught of shelling and numerous civilian deaths were reported in the south and east of the country.

Despite assessments that Vladimir Putin’s forces were taking an operational pause after seizing the city of Lysychansk, the last major stronghold of Ukrainian resistance in the Luhansk region, this was dismissed by the region’s governor Serhyi Haidai on Saturday.

Moscow’s forces were “still attacking and shelling our lands with the same intensity as before”, Mr Haidi said, later claiming that Russian bombardments of Luhansk had stalled because Kyiv’s forces had destroyed Russian-held ammunition depots and barracks.

Russia launched more than 20 artillery, mortar and rocket strikes on the region overnight and its forces were pressing toward the border with the Donetsk region, Mr Haidai said on Telegram.

He described the onslaught as “true hell”, adding: “We are trying to contain the Russians’ armed formations along the entire front line.”

Meanwhile, Ukraine’s deputy prime minister Iryna Vereshchuk urged residents in parts of the southern Kherson and Zaporizhzhia regions to evacuate so that Moscow could not use them as human shields during a Ukrainian counteroffensive.

“You need to search for a way to leave, because our armed forces are coming to de-occupy,” Ms Vereshcuk said. “There will be a massive fight.”

A civilian evacuation effort in those regions was underway, she said, but declined to give more details, citing safety fears.

It remained unclear how civilians were expected to safely leave Russian-controlled areas while missile strikes and artillery shelling continue in surrounding areas, and whether they would be allowed to depart or even hear the government’s appeal.

The civilian death toll continued to rise as a result of the bombardment in the south and east, according to Ukrainian officials.

Five people were killed and eight more wounded in Russian shelling of Siversk and Semyhirya in the Donetsk region on Friday, according to its governor, Pavlo Kyrylenko.

In the nearby city of Sloviansk, named as a likely next target of Russia’s offensive, rescuers pulled a 40-year-old man from the rubble of a building destroyed on Saturday by shelling, with Mr Kyrylenko saying that multiple people were under the debris.

Russian missiles also killed two people and wounded three others on Saturday in the southern city of Kryvyi Rih, according to authorities in the eastern Dnipropetrovsk region, with governor Valentyn Reznichenko accusing Moscow of having “deliberately targeted residential areas.”

The city’s mayor, Oleksandr Vilkul, alleged that cluster munitions had been used and urged residents not to approach unfamiliar objects in the streets. More explosions were reported on Saturday evening.

“Such terrorist action can be stopped only with weapons – modern and powerful ones.”

Ukraine’s national police force also announced that it was opening a criminal investigation into the Russian military’s alleged destruction of crops in the southern Kherson region, accusing Moscow’s forces of destroying granaries and agricultural equipment, and preventing residents from extinguishing fires.

“Large-scale fires occur every day, hundreds of hectares of wheat, barley and other grain crops have already burned,” police said.

The allegations came as a new United Nations report found that Ukraine’s armed forces bear a large – and perhaps equal – share of the blame for a deadly attack on a nursing home in Luhansk, two weeks after Russia’s invasion began.

A few days before the attack, Ukrainian soldiers took up positions inside the nursing home, effectively making the building a target.

The report by the UN’s Office of the High Commissioner for Human Rights did not conclude the Ukrainian soldiers or the Moscow-backed separatist fighters committed a war crime, but warned that the battle at the Stara Krasnyanka nursing home was emblematic of concerns over the potential use of “human shields” to prevent military operations in certain areas.

At least 22 of the 71 patients survived the assault, but the exact number of people killed remains unknown, according to the UN.