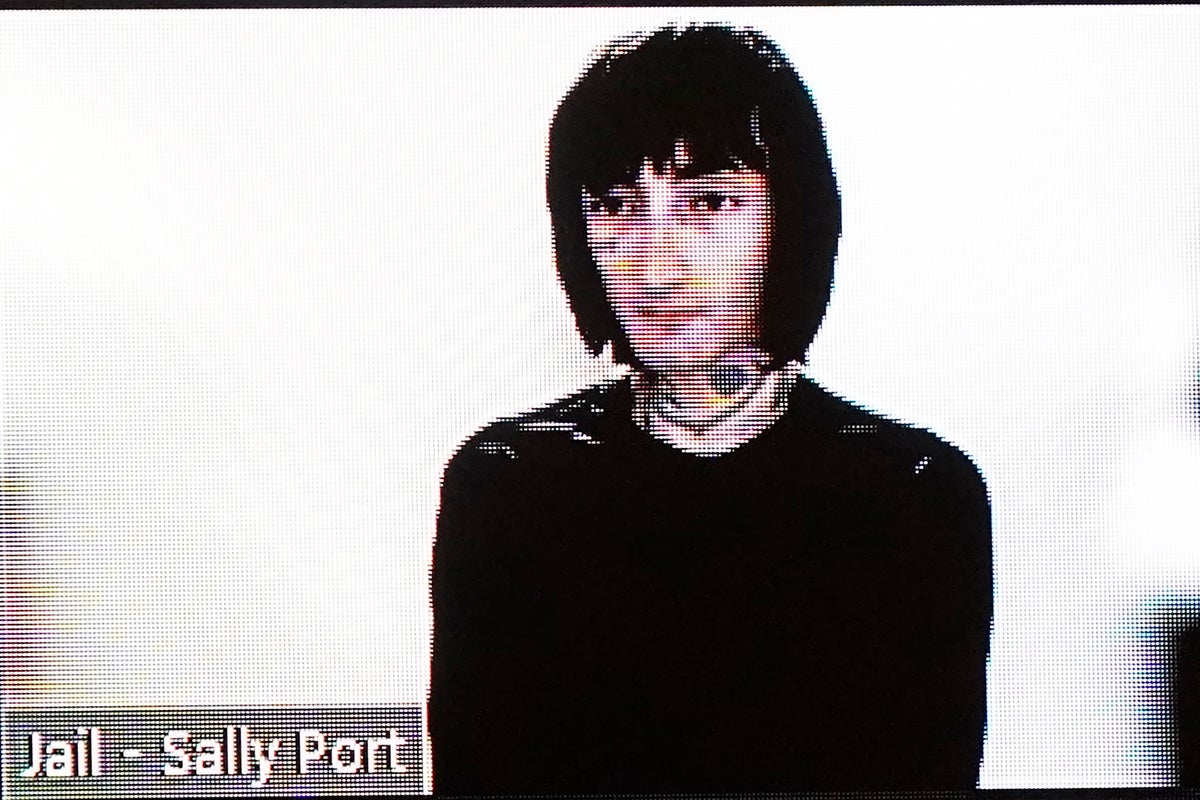 Robert Crimo considered carrying out a second attack at an event in Madison, Wisconsin, after gunning down dozens of July 4 parade-goers in the mass shooting in Highland Park, according to investigators.

The 21-year-old alleged murderer appeared in court for the first time on Wednesday morning where he was ordered to be held without bond on seven counts of first-degree murder.

In a press conference outside the court on Wednesday, Lake County Sheriff’s Office Sgt Christopher Covelli said that Mr Crimo crossed state lines from Illinois to Wisconsin, driving all the way to Madison in his mother’s vehicle.

There, he planned to carry out a second attack at another event but, for some unknown reason, changed his mind and drove back to Illinois.

“Investigators did develop some information that it appears when he drove to Madison, he was driving around, however, he did see a celebration that was occurring in Madison, and he seriously contemplated using the firearm he had in his vehicle to commit another shooting in Madison,” he said.

“Indications are that he hadn’t put enough thought or research into it.”

Sgt Covelli said that the idea for the second attack did not appear to have been organised in advance but that it appears the suspect was “driving around following the first attack and saw the celebration”.

Mr Crimo was arrested on Monday evening – around eight hours on from the shooting – along a highway just five miles from the location of the July 4 parade in Highland Park.

Inside the vehicle was a second high-powered rifle with 60 rounds of ammunition, officials said.

The rifle used in the Highland Park shooting – identified as a Smith & Wesson M&P 15 – had been dropped at the scene by the shooter as he fled the area, said investigators.

As well as these two high-powered rifles, a search of Mr Crimo’s home also uncovered at least three more firearms including pistols.

The motive for the attack is still unknown.

The new details came as Mr Crimo appeared in court for the first time charged with seven counts of first-degree murder and as a seventh victim was named as grandfather Eduardo Uvaldo, who died from his injuries on Wednesday morning.

The suspected killer appeared for a bond hearing in the 19th Circuit Court in Lake County, Illinois, on Wednesday morning via Zoom.

Dressed in a black t-shirt and his long dark hair down around his face, he stared expressionless into the camera.

The judge ordered that he be held without bond.

A commotion broke out at one point over whether the suspected mass murderer had an attorney or not.

Mr Crimo told the judge that he did not have an attorney and he was given time to speak in private with a public defender.

When they returned to the hearing, the public defender said that he was in contact with attorney Thomas Durkin who had announced on Tuesday that he had been hired by Mr Crimo’s family to represent him. Mr Durkin appeared to have struggled to access the remote hearing.

He joined later and said that he had learned of a conflict of interest he had with the case and so was no longer representing Mr Crimo.

Mr Crimo’s parents meanwhile have hired a high-profile attorney who previously worked with R Kelly to represent themselves as they released a statement saying it was a “terrible tragedy”.

The 21-year-old was charged with seven counts of first-degree murder on Tuesday – just over 24 hours after he allegedly opened fire on parade-goers, local residents and families with small children.

If convicted of the charges, he faces life in prison without the possibility of parole.

Lake County State Attorney Eric Rinehart said that they are just the first “of many charges” he plans to bring against the alleged mass murderer in the coming days.

“I want to emphasize that: there will be more charges. We anticipate dozens of more charges centreing around each of the victims,” he said.

Further charges are expected to include attempted murder, aggravated battery, and aggravated discharge, he said.

The Cook County Coroner’s office confirmed the death of another victim on Wednesday morning.

Eduardo Uvaldo, an elderly grandfather who went to the July 4 parade in Highland Park with several family members, died on Wednesday morning after succumbing to his injuries in hospital.

The victim was shot in the arm and the back of the head when alleged mass shooter Robert Crimo opened fire on the crowd of families, friends and local residents who his sniper position on the roof of a nearby business.

His granddaughter Nivia Guzman wrote on a heartbreaking GoFundMe page on Tuesday that doctors had told the family there was no longer anything they could do for Mr Uvaldo, who she affectionately referred to as “papi”.

Hours later, she said that they had been left with no choice but to turn off his ventilator.

Mr Uvaldo’s family went to the July 4 parade together every year and this year had been no different until tragedy struck.

Ms Guzman said that her brother and grandmother were also shot in the attack but survived.

The Lake County coroner named six victims of the shooting on Tuesday afternoon and said that a seventh victim – who was not named – had died outside of the county.

However, prosecutors had charged Mr Crimo with seven counts of murder before Mr Uvaldo died.

Six victims killed in the attack were identified on Tuesday, with officials confirming that an unnamed seventh succumbed to their injuries on Tuesday afternoon.

Irina and Kevin McCarthy were a married couple and parents to a two-year-old boy Aiden who will now have to grow up without his parents.

The boy was separated from his parents in the chaos and was cared for by strangers until officials could reunite him with his grandparents.

A GoFundMe set up to raise money for the little boy speaks of the “unthinkable position” Aiden is now in having to “navigate life as an orphan”.

Nicholas Toledo, a 78-year-old grandfather and father of dual US and Mexico nationality, used a wheelchair and was sitting in it watching the parade when he was struck by bullets.

Mr Toledo’s granddaughter told the New York Times they “were all in shock” and revealed that her grandfather hadn’t wanted to go to the parade but only agreed to go so that he could join in the festivities with his family.

Jacki Sundheim was remembered by local synagogue North Shore Congregation Israel as a “lifelong” congregant and “cherished” staffer whose “work, kindness and warmth touched us all”. She leaves behind a husband and daughter.

Katherine Goldstein, who was known as Katie, was shot and killed at the Highland Park parade as she and her daughter Cassie Goldstein were desperately running away from the gunfire.

Cassie Goldstein told NBC Nightly News that they had been enjoying the July 4 weekend together as mother and daughter after the 64-year-old had recently lost her own mother.

When gunfire erupted, the mother and daughter ran side-by-side away from the scene but her mother was struck in the chest by a bullet and fell.

“I knew she was dead,” said Ms Goldstein.

“I just told her that I loved her, but I couldn’t stop, because he was still shooting everyone next to me. So, I just kept running, and I hid behind a trash can.”

As well as the deceased, officials said more than 30 people were also injured in the attack.

Investigators announced on Tuesday that Mr Crimo had been planning the attack at the July 4 parade for “several weeks” and had amassed a trove of around five firearms.

Lake County Sheriff’s Office Sgt Christopher Covelli said that Mr Crimo, disguised in women’s clothing and armed with an AR-15-style rifle, went to the parade route in Highland Park and scaled the roof of a nearby business.

From a sniper position on the roof he then unleashed a hail of more than 70 rounds of bullets into the crowd of parade-goers and participants below, said officials.

Mr Crimo then abandoned the rifle at the scene and managed to escape undetected by dressing in women’s clothing and a wig.

Hiding in plain sight among the panicked parade-goers fleeing, the suspect allegedly calmly walked home to his mother’s house.

He was arrested hours later when he was spotted driving along a highway in his mother’s car.

Mr Crimo’s parents broke their silence on Tuesday night in a statement where they offered “thoughts and prayers” to the victims of the attack which has left at least seven dead and dozens more injured.

“We are all mothers and fathers, sisters and brothers, and this is a terrible tragedy for many families, the victims, the paradegoers, the community, and our own,” Bob and Denise Crimo said in a statement through their attorney Steve Greenberg.

“Our hearts, thoughts and prayers go out to everybody,” they said, requesting privacy “as they try to sort through” the shooting.

The statement came after it emerged that Mr Crimo’s father – who unsuccessfully ran for mayor of Highland Park against current Mayor Nancy Rotering – sponsored his son’s application for his first firearm permit just three months after the then-20-year-old threatened to kill his family.

Officials revealed in a press conference on Tuesday afternoon that law enforcement were called to his home for two incidents involving the suspect in 2019.

In April 2019, Highland Park Police were called to the home to a report that Mr Crimo had tried to kill himself around one week earlier.

Officers responded to the address and spoke to Mr Crimo and his parents, before referring the incident to mental health professionals.

Five months later – in September 2019 – police were called to a report from a family member that Mr Crimo had vowed to “kill everyone” inside the home with a “collection of knives”.

Officers responded to the scene and found Mr Crimo had 16 knives, a dagger and a sword.

The knives were confiscated but officers did not arrest the suspect because no complaint was made by the alleged victims.

But, Mr Crimo’s father later said the knives belonged to him and they were returned to them.

Because he was under the age of 21 at the time, his father sponsored the application and it was approved one month later in January 2020.

Since then, he has legally purchased at least four more firearms in the state of Illinois.

Officials are now facing questions about how he was able to legally attain multiple firearms given his prior interactions with law enforcement and his disturbing online presence.

It has since emerged that Mr Crimo posted several disturbing videos and posts glorifying violence, firearms and mass shootings online prior to the attack.

The massacre has once again renewed calls for tighter gun control measures coming in the wake of a string of mass shootings that have torn apart families and communities across the country.

Back in May, 21 students and teachers were murdered in a mass shooting in Uvalde, Texas, and 10 Black people were shot dead in a racist attack in Buffalo, New York.

President Joe Biden lowered the flags at half staff on Tuesday in honour of the Highland Park victims and said that it showed there was “much more work to do” to tackle America’s gun violence.